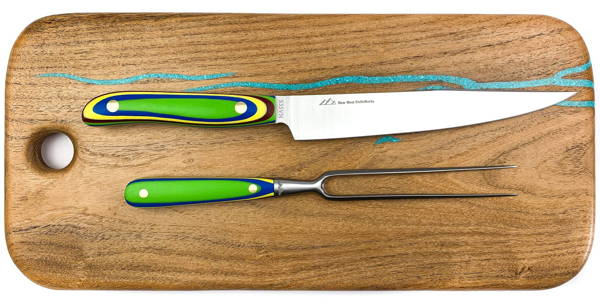 Out with the Old, in with the New West New production space build out inside a factory in Victor, ID.

Twenty years ago, New West KnifeWorks founder Corey Milligan was working as a raft guide and a line cook ­­–“back before cooks all called themselves chefs”­– and making knives as a side hobby. The newly married Milligan purchased a two bedroom subsidized housing unit in Jackson, Wyoming, and as a true testament to the importance of compromise, his wife agreed to let him turn the spare bedroom into a knife-making “factory.”

“I laid plastic down on the carpet, put plywood on top of that, and put a plastic screen in the doorway to keep the dust out,” Milligan remembers.

Plenty of institutions have humble garage roots­– Apple, Google, The Who­– and in a ski town where garage space is crowded with snowboards, snowmobiles, and mountain bikes, a mountain man’s just gotta make do. That plywood and plastic covered spare bedroom was the testing ground for the chef’s knife, bread knife, paring knife and steak knives that Milligan is now famous for. Though it served them well, the previous New West KnifeWorks space on Gregory Lane in Jackson, WY was becoming cramped.

The knife factory has moved a total of eight times since then, including stints in an old Wyoming guest cabin and a rented shop across the street from the Hells Angels headquarters in Ventura, California. This month, New West KnifeWorks has been on the move once again, relocating tools, machines, and employees from a 1,500 square foot rented space on Gregory Lane in Jackson to its new 10,000 square foot home in Victor, Idaho. Moving is often tedious, but getting out of their old space was worth the work.

New West owns the new building, which lies just over a steep mountain pass about forty minutes from their retail shop in downtown Jackson. Victor, Idaho is what Jackson was twenty years ago­– a quaint, quiet valley town with cheaper real estate, available labor, and more local families than empty second homes and hotels. The factory will be able to accommodate growing demand for the custom knives– their chef’s knife sold out over Christmas– and include an internet distribution center, plenty of new local hires, and an outlet store.  Where tools used to lie on top of tools, new organized assembly lines will exist, clearing the clutter for innovative new projects.

Production manager Erin Hemmings says, “The new factory is exciting for me because it means I get to design more new machines. It’s a huge upgrade in terms of space, and space equals capability.” New West Head of Production, Erin Hemmings, at work on the build out.

More space to foster Hemmings’ creativity is certainly a good thing. In cramped quarters, he has already invented a completely unique machine that seamlessly adds serration to bread and steak knives, and a polishing machine that speeds up production by polishing both sides of a knife at the same time. Milligan says, “Knives have been made forever, so to make something unique like this is kind of a big deal.” The serration and polishing machines are actually still just working prototypes, and Hemmings explains, “You don’t make your final model on your first try.” Hemmings will use his expanded work space in the new factory to perfect version two of both the serration and polishing machines as well as focus on new innovations: first on his agenda is the creation of custom folding knives.

“I’m obsessed with how to overcome challenges when making tools or cool stuff,” Hemmings says.  The new factory might as well have “Cool Stuff Made Here” written on the side of the building, and one can only imagine what will materialize as a result of so much expanded capability. Remember, it all started in a spare bedroom. The New West production team leans on their own engineering and construction skills to create their new workspace.